The Android version of the famous battle royale

Play on PC Powered by 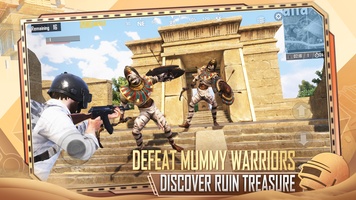 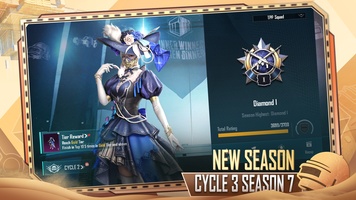 Advertisement
PUBG MOBILE is the international version of PLAYERUNKNOWN'S BATTLEGROUNDS for Android devices. In this version, you can easily sign in using your Google or Facebook login information. But, if you don't want to do that, you can always play as a guest (no need to sign in).

With PUBG MOBILE, you get a typical battle royale. In other words, you're inside a closed setting where 100 players have to battle it out, and only one of you can make it out alive. If you want any chance of making it to the end, move around the island, collecting the best equipment and weapons you can find. And you better be quick because the play area shrinks in size as time goes on.

Pretty much all of the elements from the PC version of PUBG are present in the mobile version. The controls have been well-adapted for touchscreens, as have the game's other objects and interactive features. You can enter buildings, drive vehicles, use scopes, find first aid kits, climb over walls, etc.

In the settings options, you can adjust the graphics, adapting them to your smartphone's capabilities. This way, the more powerful the device, the better the game's graphics. You can also customize the controls, both when you're on foot and behind the wheel of a vehicle.

PUBG MOBILE is a fantastic adaptation of the original PLAYERUNKNOWN'S BATTLEGROUNDS. And just like the original, you can enjoy several different game modes: solo, duo, or squads. If you play with friends, you can even talk to them using your smartphone's microphone.
Reviewed by Andrés López Translated by Sarah Odebralski
Advertisement

What happened to PUBG MOBILE?

PUBG MOBILE was launched March 19, 2018. Although it's available almost everywhere in the world, it's banned in countries like China, India, Pakistan, Afghanistan, and Nepal.

PUBG MOBILE is supported on Android devices with a 64-bit processor, 2 GB of RAM, and Android 6.0 or higher.

How much does PUBG MOBILE weigh?

PUBG MOBILE APK is 1 GB, but the game requires at least 2 GB after taking into account all the files needed for installation.

When will PUBG MOBILE shut down?

PUBG MOBILE won't shut down. The servers are occasionally down for a few hours after a new update is released until the new patch is applied.

How can I play PUBG MOBILE on my PC?

To play PUBG MOBILE on your PC, you'll need an emulator like GameLoop, Nox Player, or LD Player.

this game is really cool with its graphics

Too bad since I have a huaweii Y9A and as everyone knows we no longer handle android, therefore, I installed GSSpace which is only an android emulator without cheats without anything... and they block... It may interest you

Smash Colors 3D
Control the ball to smash into elements of the same color
Slayaway Camp: Free 2 Slay
A puzzle game based on horror movies
Age of Apes
Bike Clash
Exhilarating mountain bike races
HELI 100
Hop into a helicopter and destroy all the aliens!
Angry Birds Friends
The time has come to enjoy the famous birds with your friends
Chickens Gun
Will you be the last chicken standing?
Sandbox - Physics Simulator
A top-notch sandbox game